Two sisters from Winchester are currently doing something most musicians have, at one time, dreamed of doing but found, when it came to the crunch, they weren't daring enough to undertake, namely getting in a van and setting off to wherever their whim and sat nav takes them. Acoustic soul duo Daughters Of Davis are on their second phase of a multi-gig tour of Britain which means playing in pubs, clubs, coffee houses, shopping centres, schools and, if nothing else can be found, busking on the streets. Not only are Adrienne and Fern Davis successfully performing to tens of thousands of people they are selling sufficient copies of their second album 'To The Water' to make the whole adventure possible.

Stopping off from their mile-burning jaunt long enough to call in to the Cross Rhythms studio, the vivacious young ladies fielded some of my questions. I began by asking how they first caught the music bug. Explained Adrienne, "Even as children we were singing at home. We've got an older sister, Danielle, as well. We used to sing together when we were younger. She's a teacher now." Fern quipped, "One day we'll persuade her to join Daughters Of Davis."

So how do two white middle class girls end up singing soul music? Explained Fern, "Our parents don't play music but from a young age they played us old soul music. Their taste in music's been great to grow up with. It gave us an ambition to want to do music after hearing all the classics and the greats from people like Stevie Wonder, Aretha Franklin, Otis Redding, Ben E King."

So what about their spiritual roots? "Our parents are both Christians and that's how we were brought up," explained Adrienne. "But it was quite a bit of a journey and we've had the faith to step out and pursue our music. That came from our faith in God, really. That's definitely the roots of our music."

When Fern was at college she and her sister cut their teeth in a local soul funk band. She remembered, "They had a few names, but one of the last names was Grand Revolution. They were a Winchester-based band and they lasted a few years and would gig around the south. We all went to university and then went our different ways, but that was a lot of fun. And it got Adrienne and I used to writing songs and singing before an audience."

When Grand Revolution came to an end in 2005 Daughters Of Davis began to do occasional gigs. It was a struggle, as Fern explained. "Adrienne was juggling an occupational therapy job and also doing music and I was doing a Fine Art degree and we were doing music in the evenings. It was heavy going. We even shot a film at one point and we were trying to get all these things done. But it was brilliant this year to absolutely focus on and completely concentrate on music."

By 2010 the Daughters were daring to dream about committing themselves full time to music. Two things were needed, an album and a van, and the sisters began saving for all they were worth. With a second hand van they soon had it packed, not only with clothes and sleeping bags, but albums. Explained Adrienne, "The album we recorded (called simply 'Daughters Of Davis' and recorded in Winchester's Valley Studios) was just stripped down versions of some of our songs - little more than a demo really. But touring over the year we actually were running out of copies. We were getting to the end of the tour because things were getting really difficult money-wise and it was kind of a struggle being in the van and things. . ." Fern added with understatement, "It was getting colder as well. . ."

Months of living off economy porridge and 17p soup interspersed with bouts of busking the petrol money to the next town were beginning to take their toll. Then at the crucial moment the hard gigging duo met up with Resound Media, the Sheffield-based Christian media company run by producer Andy Baker. With Resound's help plans for the Daughter Of Davis' 'To The Water' album quickly took shape with the duo deciding to record six songs from 'Daughters Of Davis' and six newly minted numbers. The album featured a wide variety of arrangements. Said Fern, "There are some songs which are just a guitar and even just a shaker and that's it, and there are some songs with a full drum kit, bass and electric guitar and things. There's a mix, really, on the album and we're quite happy to keep it that way. I think some of the stripped back tracks could get radio play, depending on the radio station, and if you're feeling lively then some of the other ones with a band. I think 'Take My Soul' could be a good one on the radio."

The album's title 'To The Water' is actually taken from the lyric of "Take My Soul". The spiritual overtones of the title are quite intentional. Said Fern, "The song is about a fresh start. We wrote it as we left to go on our second tour. We write from a place which is from experience, so there's not one part of our life that is necessarily Christian or following faith, it's sort of interwoven in all of our life and all of our experience, so when we write it's from that whole pool of experience."

Has all the touring led the Daughters Of Davis to road fatigue? Fern was emphatic in her response, "No, definitely not. We love touring, it's the funnest thing. We're gigging most nights and England is just amazing. It's great to tour England and the UK. There's so much to see and we're really enjoying seeing it bit by bit and meeting the people. We've just met some really great people in the country that have really been good to us and really restored our faith in good people in England. We've been to Ireland and we've still got Wales and Scotland to do."

How badly do you want it?

Cambridge, we’re coming to you!!

"All those years doing other things, however useful, however good, however laudable they were, 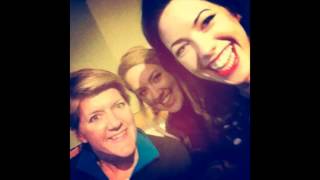 “Talented duo that are blessed with 2 great voices.”